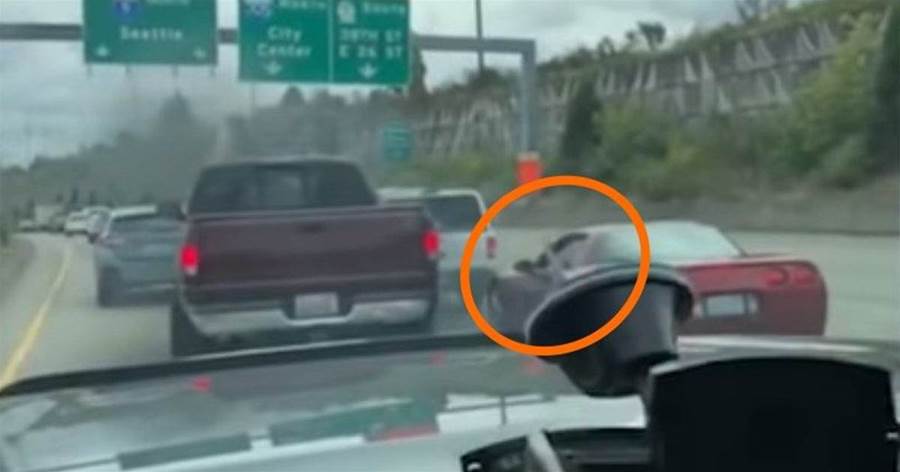 A pickup truck was simply trying to merge into the right lane when an easily annoyed driver rolled down the window of his red Corvette and decided to flip the guy the bird. That’s when he got taught a nasty lesson he won’t soon forget. It’s safe to say he won’t make the same mistake again any time soon, but did he get what he deserved? You decide. 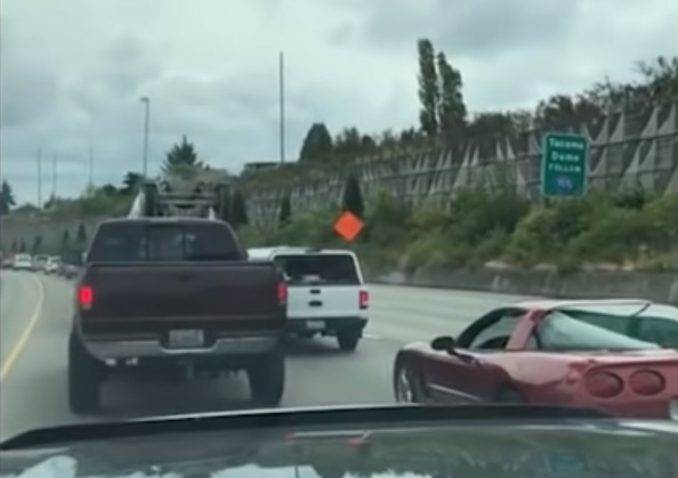 A dark Dodge pickup truck wanted to merge into an exit lane, but the driver of a red Corvette wouldn’t let him over. (Photo Credit: YouTube)

A red Corvette, captured in a now-viral video recorded in Tacoma, Washington, decided to learn road etiquette the hard way. Few things are as annoying as those who don’t show any consideration for the other drivers with whom they share the road. So, it’s easy to understand why the driver of a Dodge pickup truck became increasingly annoyed when all he wanted was to be given the space to merge into the right lane of traffic.

Instead of being allowed into the highway exit lane, he was met by a rude sports car driver’s ignorant behavior. Rather than let the pickup over, the man rolled down the window of his red Corvette to give the driver of the truck the finger instead. Fed-up, the guy in the Dodge saw the perfect opportunity to enact his road rage revenge, and luckily for us, another motorist’s dashboard-mounted camera caught it all.

When the red Corvette driver, refusing to let the truck into his lane, rolled down the window to lean his arm out and give the man in the Dodge the finger, he left himself wide open — literally. He learned what a bad move he made when his rude behavior was quickly met with a face full of smoke after the Dodge driver positioned his vehicle just right and revved his engine in retaliation, blowing a tailpipe full of smoke right into the Corvette’s open window and into its driver’s face.

The man filming the video in the car behind the Dodge is heard laughing as the smoke takes about five seconds to dissipate. After the thick, black cloud of smoke cleared, the person recording the clip said the bold move had the desired effect. Lesson obviously learned, the driver of the Corvette let the truck in, according to Daily Mail. 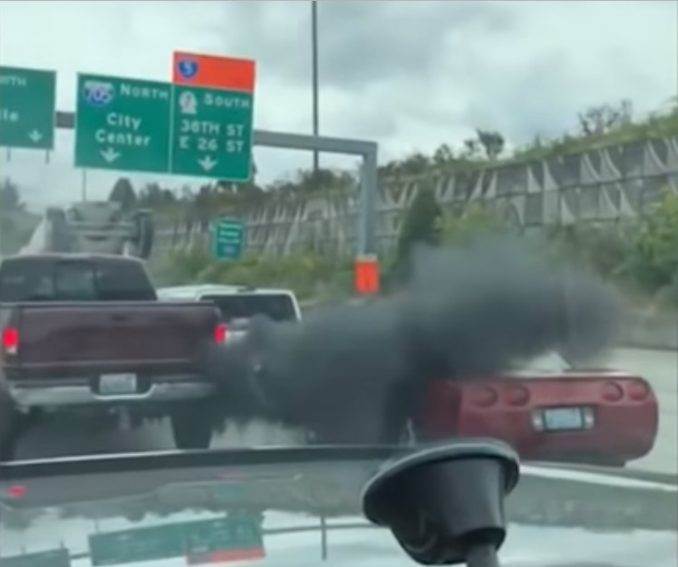 The driver of the red Corvette learned the hard way that it would have been better to just let the Dodge merge into his lane. (Photo Credit: Facebook)

“I was driving through traffic near Seattle and noticed a Corvette not wanting to let a Dodge merge over into the lane, so the Dodge pulled beside him,” the driver wrote when he posted the clip online. “As the Corvette driver was rolling down his window and went to flip him off, the Dodge owner coaled him with so much smoke you couldn’t even see the driver in the car. He did end up letting the truck over.”

It doesn’t take but a second to stop and let someone in or out of traffic. Too many people are sadly losing their courtesy, patience, and manners. As a result, it’s hardly surprising that other drivers react to the selfishness from time to time and seek to teach rude road ragers a lesson in how to drive like a decent human being. But, did this Dodge driver go too far? 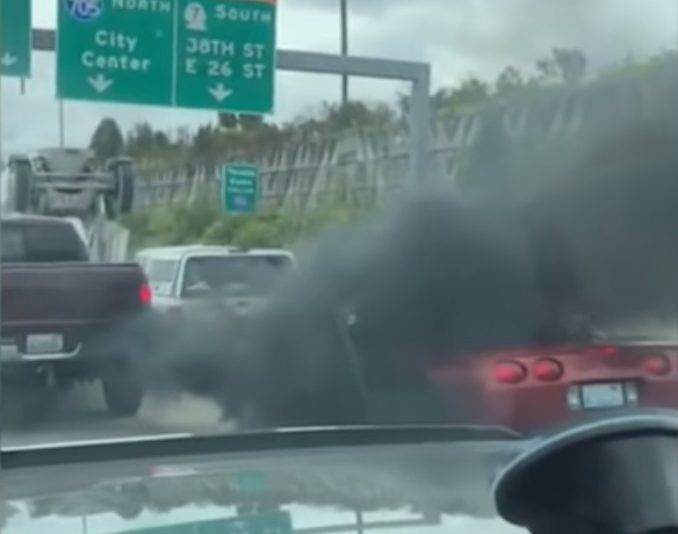 That thick, dark cloud of exhaust no doubt left a lasting scent that will be a reminder to this motorist that he should respect his fellow drivers on the road. As for other drivers who like to behave in a similarly rude fashion, hopefully, they will get the opportunity to watch this clip and learn from this guy’s mistake.

In the time it took to roll down the window and flip off the other guy, the red Corvette could have just let him over. He chose to make life harder than it needs to be for everyone involved. Next time you are on the road, do everyone and even yourself a favor — don’t be a jerk.