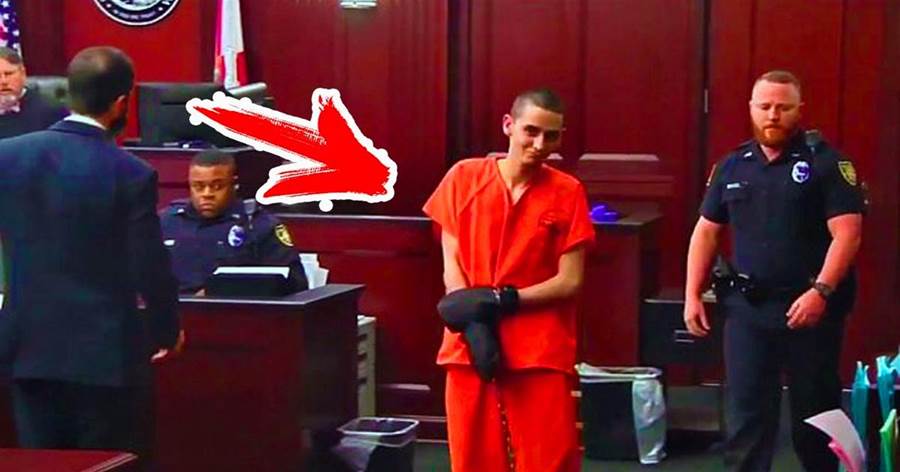 Kevin Rojas was just 19 years old when he tried to kill an undercover Jacksonville Sheriff’s Office officer who was in his car with his teenage son. When the off-duty officer, who was taking his son to school, saw Rojas driving erratically, the cop decided to make a traffic stop. Rojas got out of his car and shot through the windshield of the officer's vehicle, striking him four times. Luckily, the officer's teenage son was unhurt in the incident. The officer, however, was struck in the face, stomach, and hand. 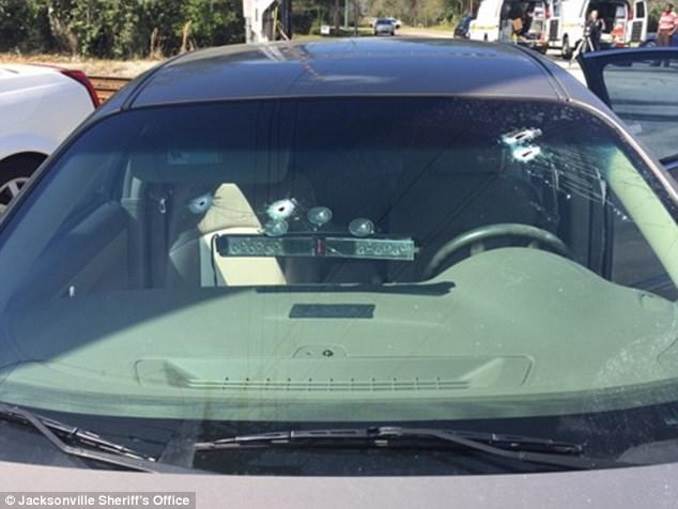 The wounded police officer, even after taking a bullet to the head, managed to fire back as Rojas ran away. The thug stole a truck and raced back to his neighborhood, barricading himself inside his home after crashing the truck at a neighbor's house. Rojas was shot multiple times through a glass door, hit in the torso, leg, and hand, after police officers said he wouldn't drop his gun, according to Daily Mail. 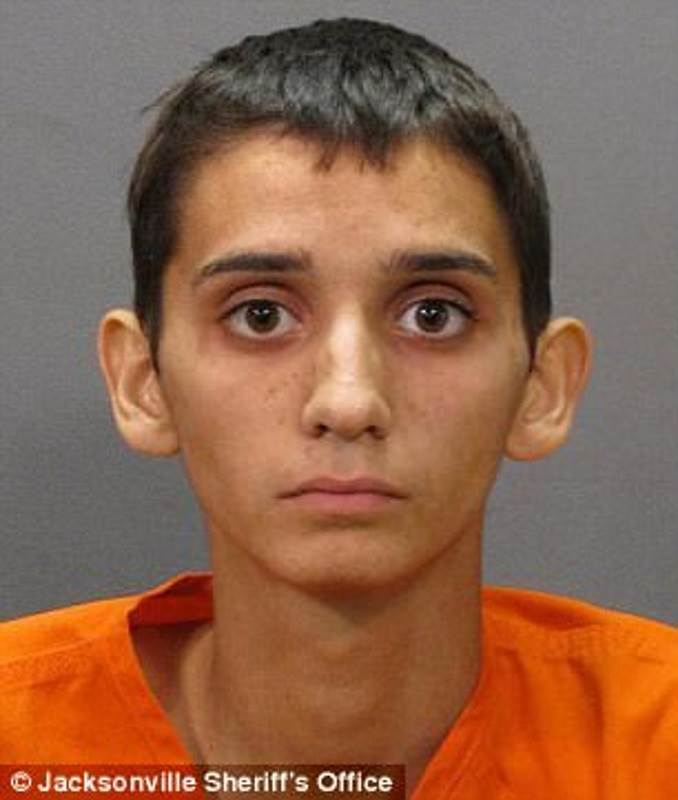 A smug and smiling Rojas was sentenced to life in prison after being found guilty of attempted first-degree murder, attempted manslaughter, two counts of aggravated assault on a law enforcement officer, grand theft auto, and fleeing. Circuit Judge James Daniel sentenced him to the maximum prison sentence for each of the crimes he committed. So, Rojas not only received life in prison but also three 15-year sentences for the lesser charges.

The judge told Rojas he struggled with the implication of what happened the day the teen decided to attempt to kill the officer in cold blood. He said he could not comprehend how Rojas could arrive at the decision to open fire with an intent to kill. As the judge read Rojas' sentence, he said, "I'm pretty sure Mr. Rojas doesn't understand what the rest of his life means.” 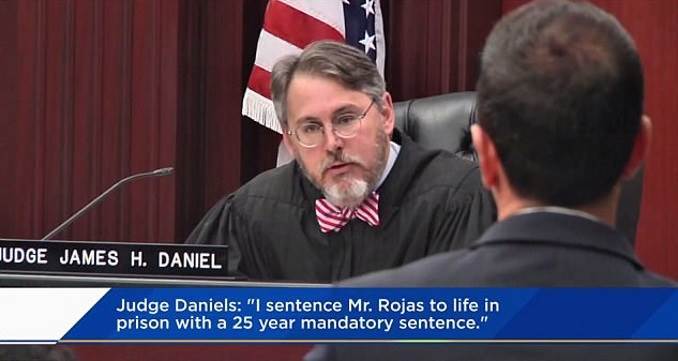 If Rojas didn't have an idea what life in prison meant, the cop he tried to kill gave him a clue. The police officer decided to taunt the young man who shot at him and his son by giving him a going away gift. As Rojas was appearing in court for the attempted murder of the unidentified officer, the cop had a few words for the thug before giving him his special surprise.

"I will take those bullets instead of a fellow officer or innocent bystander," the officer said. "If there was a coward on that day, it was Kevin Rojas," he told the court before addressing Rojas directly. "When I brought the fight back, you ran like a coward." Then, the officer told Rojas about the gift he had for him. "So, I got a little gift for you," he said. As the officer slammed a bottle of KY Jelly lubricant on the witness stand in front him, he added, "You're going to need a lot of this where you're going little man." Although Rojas was not allowed to take the officer's gift with him to prison, the message the officer sent was clear.

The officer's gift received mixed reviews from social media users. While many applauded the officer for being brave enough to confront the man who attempted to kill him, others criticized him for taunting a criminal, despite the fact that the thug tried to murder the policeman and his son.

"Too bad the cop [didn't] take out his weapon in the courtroom and kill that piece of s**t right there save taxpayers a lot of money,” one Facebook user commented while another added, "I shouldn't laugh, but that is priceless. It's good the creep didn't kill anyone and that the teenage son wasn't injured.” 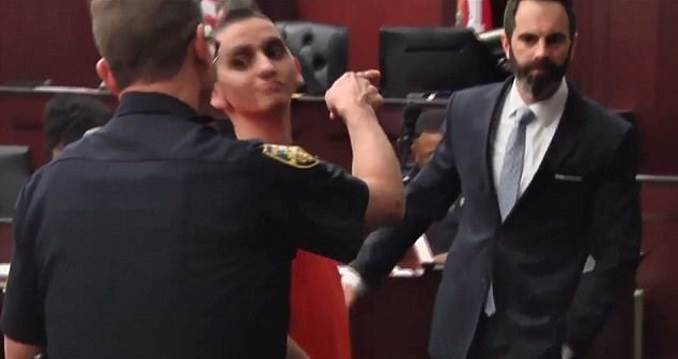 "Good for that cop, a very appropriate going away present for the thug. Awesome," another wrote while yet another commented, “I don’t blame the cop. This clown wrecked his life for nothing. The judge did the right thing. This nut cannot be loose. When he is 60, if he lives that long, he may be better. If they can let him out then, maybe. I would not lose much sleep over it for now.”

However, the critics called into question the cop's professionalism. “A real professional that officer. You may be frustrated however you have no integrity nor honor in your use of a gimmick, stupid one at best, during your speech at the sentencing of this thug. Hope the department sees what you really are,” one reader commented. 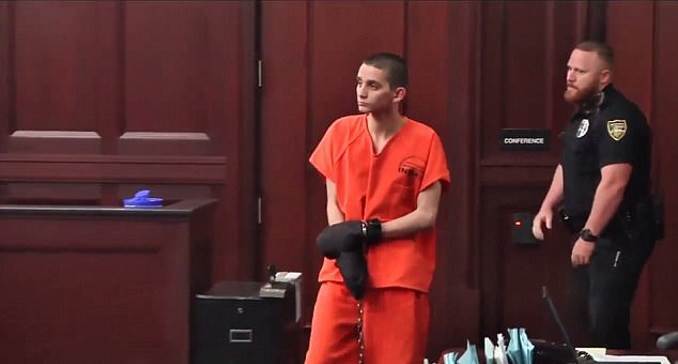 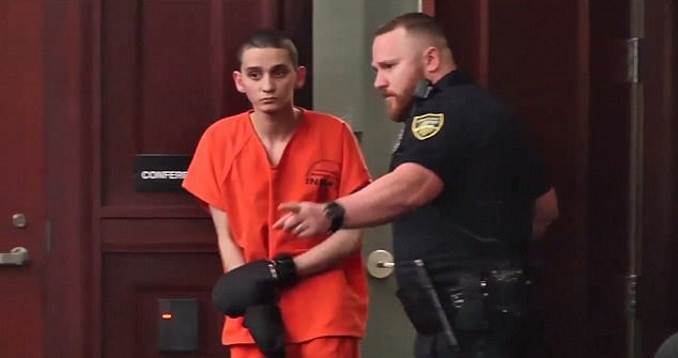 Others focused more on a harsher punishment for Rojas. "A life sentence makes no sense. Anyone dangerous enough to be imprisoned for life should simply be swiftly terminated instead of remaining a drag on society for years to come,"one reader wrote.

Kevin Rojas' family reportedly fled the courtroom in tears after his sentencing since they surely understand the implications of the young man's sentence, even if he was too ignorant to fully grasp what “life” is just yet. Luckily, time has a way of bringing about an understanding for people, and Rojas, who has a lot of time ahead of him, is no different — only his will be a very tormented reality. But, I don't think too many people are going to sympathize with him.