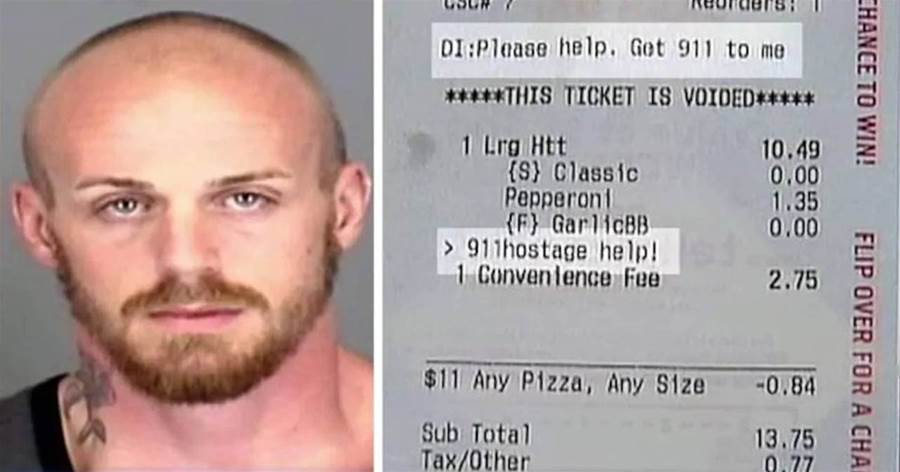 We've all heard of the message in a bottle from someone stranded on an island and needing rescue. Now, it appears a message via a smartphone app for a pizza order saved the life of a Florida mom and her kids who were taken hostage.

It had to be the most unique pizza order that Pizza Hut has ever received.

An eagle-eyed Pizza Hut chef, Alonia Hawk, spotted the note in the pizza order after it was printed by Pizza Hut Store Manager Candy Hamilton at the Avon Park, Florida Pizza Hut. The plea for help had been written in the "Comments" area of the form.

"It said 'Please help! Get 911 to me.' And she placed a pizza order and then down here it said, '911 hostage help,'"  related Hamilton, showing news reporters the order receipt. "I was kinda scared. I was scared for the person," said Hawk.

The store employees, who recognized the name and location as being from a regular customer, immediately alerted police by calling 911.

"We've never seen that before," Hamilton told a news outlet. "I've been here 28 years and never, never seen nothing like that come through."

Cheryl Treadway, who ordered the pizza, told police she had been taken hostage by her boyfriend, Ethan Nickerson, earlier in the day.

Treadway told a police hostage negotiator, Lt. Curtis Ludden, who was the first to arrive on the scene, that the 26-year-old Nickerson had a knife.

"She comes running toward us but two kids are still in the house with a person who's on narcotics and you don't know how their mindset—with a knife—and we need to get them out of the house," said Ludden.

The hostage situation came into play after a day of arguments between the couple, according to Treadway. At one point, Nickerson had taken Treadway's phone. She told police she got it back after convincing him they needed to order food for the children if he wasn't going to let her leave the house.

Her quick thinking in sending the 911 alert in the order was key in helping resolve the domestic incident and kept it from escalating, said Police Chief Deputy Mark Schrader.

Police were able to talk Nickerson into leaving the house without anyone getting hurt. He was then arrested and is facing charges of aggravated assault with a weapon without intent to kill, as well as battery, false imprisonment and obstruction of justice.