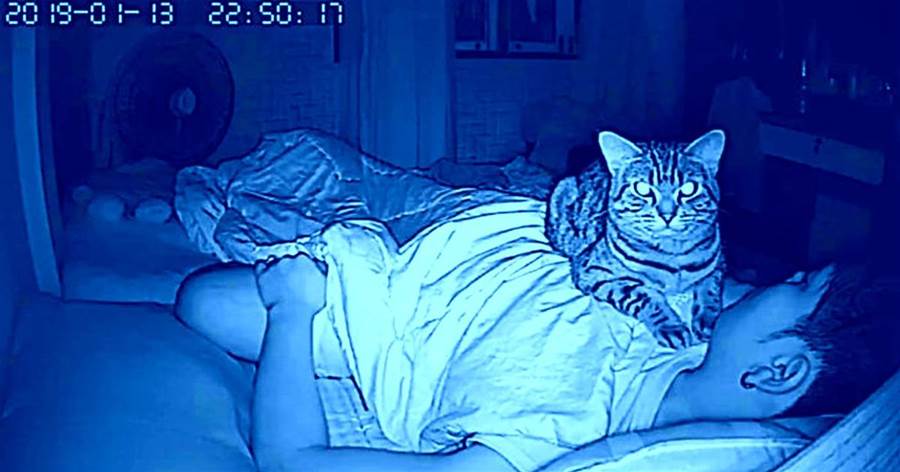 A  man has recently been struggling with his breathing during the night. Time and time again he struggled. Finally, in desperation, he decided to set up a camera to see what happened.

What he captured was something unexpected. 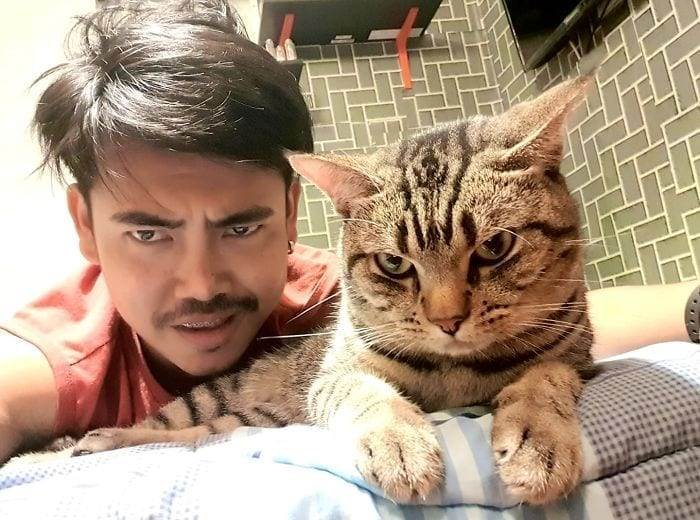 Lomphonten Lomphontan loves his cat Achi. Achi has always been incredibly affectionate and loved nothing better than cuddling up with his owner and spending time with him. However, Lomphonten recently discovered about his furry friend.

Achi had a secret. 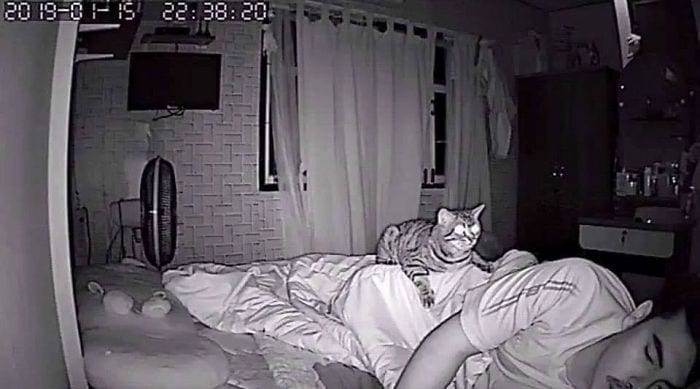 Lomphonten had set up a camera in his house to keep an eye on Achi. He wanted to know what Achi got up to during the day while he was at work. However, due to his trouble breathing at night, Lomphonten decided to turn the camera on himself one night.

That’s when he saw Achi do something completely unexpected. 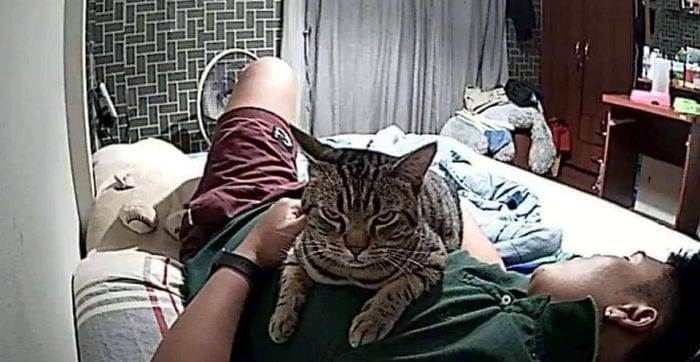 As it turns out, Achi decided to get to some serious cuddling. When Lomphonten decided to review the video of himself sleeping, he noticed that Achi immediately sprang into action once Lomphonten fell asleep.

In the video, Achi can be seen approaching the sleeping Lomphonten carefully. After creeping closer, Achi carefully tests Lomphonten by using his paw to confirm that he is in fact asleep.

Once satisfied that Lomphonten is really asleep, Achi makes his move.

Achi moves in close, gets on Lomphonten’s chest and gets comfortable. While nothing seems unusual about this Achi wasn’t satisfied with lying on his chest. Achi decided there was a much better place for snuggles.

That place was Lomphonten’s face. 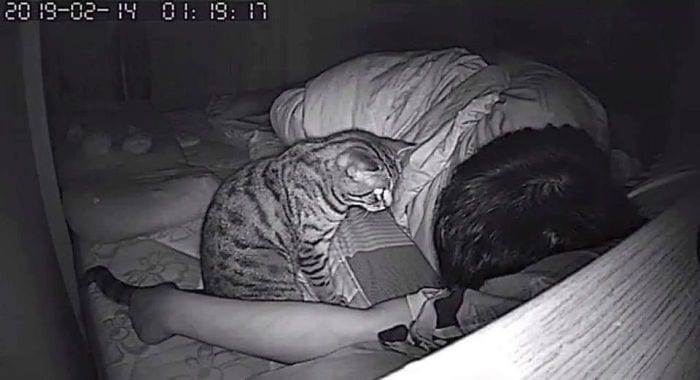 The series of photos shows Achi watching Lomphonten curiously. Slowly the cat starts to creep closer and closer. Eventually, Achi is face to face with his human and after testing him, climbs onto his face and gets comfortable.

Take My Breath Away 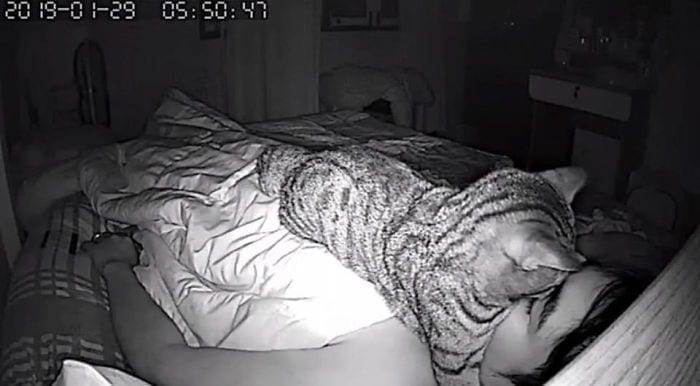 Lomphonten’s difficulty breathing turned out to be a result of Achi. He was lovingly choking his owner every night. Suddenly the difficulty he had breathing at night all makes sense.

Lomphonten, however, wasn’t angry or upset at all.

Under normal circumstances, Lomphonten might not allow Achi to indulge in this in-his-face type of snuggling. However, until now Lomphonten had also been oblivious to Achi’s evening ritual.

Achi is clearly unapologetic and doesn’t see anything wrong with his actions. 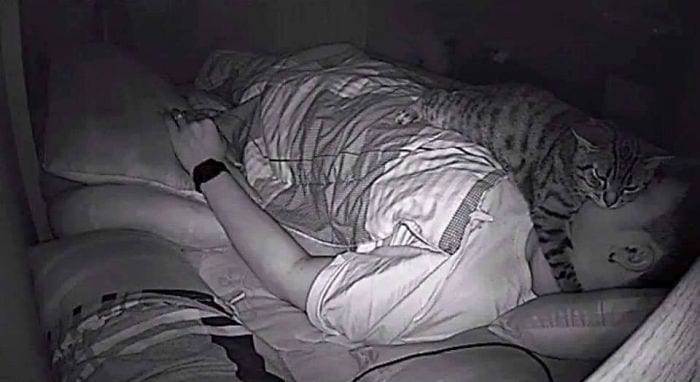 “I sat and watched [the footage] one night,” Lomphonten said. “It was very funny.” He continued by saying “I feel very much in love with him that he loves me like this. It’s a show of love.”

The question is what Lomphonten would do about this. 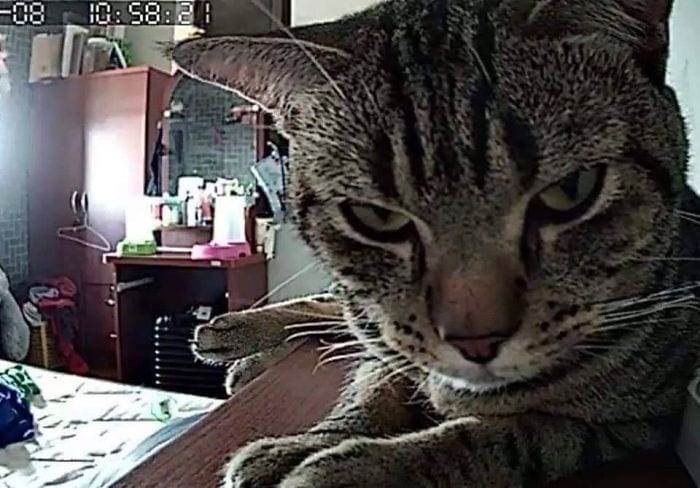 Lomphonten has no plans to dissuade Achi from making himself as comfortable as he wishes at night, knowing that the cat’s desire to be as close to him as possible is really just a reflection of what’s in his heart.